OFF KILTER: A Buffalo Steampunk Adventure by Laura Strickland 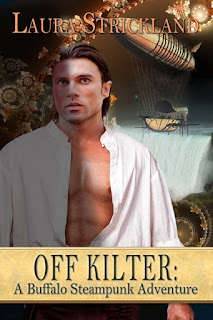 James Kilter has few illusions about himself. Maimed in a boiler accident when young and routinely reviled by those he encounters, he’s no prize for any woman. He’s content working security for a good friend until he sees Catherine Delaney disembark from an airship one May afternoon. Her fragile beauty calls up all his protective instincts. But will she accept a monster as her defender?

Having traded her own safety to save her young sister, Cat Delaney has landed in the hands of a ruthless, wealthy man who intends to use her as a pawn to his avarice. Alone in a strange city, she has nowhere to turn except to the very man hired to keep her from running. Can she trust James, with his ruined face and crusader’s spirit? Dare she give him her heart?

James switched his gaze to the three people who had just disembarked, two men and a woman, and promptly lost all the breath in his body.

They made an unlikely enough trio—one of the men willowy and slender, clad in a splendid suit that screamed wealth, the other broad and squat if also well-dressed. James dismissed both of them almost immediately, for the third of the group gathered all his attention and focused it the way a mirror gathers light.

"That his doxy?" Latham persisted.

She wore one of the new tailored gowns of some thin fabric that fluttered around her slender body in the breeze off the water. Strawberry-blonde hair clustered round her head in a woven crown of curls and even from fifty paces away James could see the delicate perfection of her features. She stood between the two men like a doe trapped by wolves, and something about her demeanor bespoke the fact that she longed to flee. Suddenly James wanted to tear the two men apart with his bare hands, rescue her, change her world. He knew he could do it too; at that moment he could best anyone.

And just as abruptly, James wanted to tear Latham apart also, a visceral reaction that flowed from the core of his being outward to his fists.

"Button it," Tate snapped before James could. "That's our client, Mr. Sebastian Boyd—one of the wealthiest men you'll ever meet."

And with him, James amended in his head, the most beautiful woman he'd ever hoped to behold.

Born in Buffalo and raised on the Niagara Frontier, Laura Strickland has been an avid reader and writer since childhood. To her the spunky, tenacious, undefeatable ethnic mix that is Buffalo spells the perfect setting for a little Steampunk, so she created her own Victorian world there. She knows the people of Buffalo are stronger, tougher and smarter than those who haven’t survived the muggy summers and blizzard blasts found on the shores of the mighty Niagara. Tough enough to survive a squad of automatons? Well, just maybe. 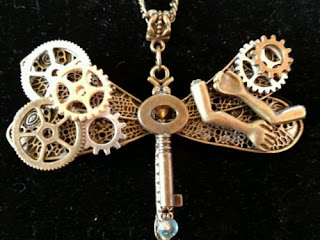