That was the first thing that went through my head when the wonderful folks at Suspense Magazine asked if I’d like to write a short story for their thriller anthology edited by Jeffery Deaver, NOTHING GOOD HAPPENS AFTER MIDNIGHT.

I make a pretty good living as an author. When people ask me what I do, I tell them: “I write scary thrillers, the kind where someone says at some point, ‘The call came from inside the house!’” If I’m with a friend when such an inquiry is made regarding my occupation, I depend on them to pipe up: “He’s a New York Times Bestselling Author.” That’s what friends are for.

At the same time, I suffer from imposture syndrome whenever I’m on a panel or lumped together with a group of big name thriller writers. I remember being on a panel with one of the aforementioned authors and some other heavy hitters, and as we were being introduced, I thought: “I’m going to make an ass out of myself in front of these superstar authors.” I imagined audience members asking each other later: “Who was that author who was babbling incoherently and then fainted?”

So, I was pretty flattered—but intimidated—to be on this list of authors. I wasn’t sure what kind of story to write for NOTHING GOOD HAPPENS AFTER MIDNIGHT. Then it dawned on me. Amid all the tales of terror woven by suspense experts in this anthology, I could do something kind amusing—with mild suspense and a little O. Henry twist in the finale.

So I went out for a walk, hoping for inspiration to strike.

But I live in a very trendy neighborhood of Seattle. So instead of being inspired during my constitutional, I was just frustrated at having to step aside for all the cell phone absorbed idiots who didn’t know how to share the sidewalk with others. In one busy block, I passed about sixty people—some walking alone, some in pairs, some walking dogs and some in groups. All of them were looking at their phones. I didn’t pass a single person without a phone. I was the only one. It was very Orwellian. I started to laugh. And it was okay to laugh insanely, because no was looking up from their phone to notice me.

I think this is what’s happening in most big cities—and in Seattle, especially, because of all the techies who live here. Unfortunately, that just increases the odds of running into rude cell phone users.

He’s in the men’s room, talking on the phone while at the urinal next to me. She’s in a movie theater, texting in front of me during a very emotional moment of the film. He’s twittering while walking his dog and letting the leash stretch across the entire sidewalk so I can’t pass. She’s a millennial mom on a crowded sidewalk, blithely pushing her child in a stroller as if it were a battering ram while she gazes down at her phone. He’s shirtless in a locker room, taking a selfie in the mirror by the showers while I’m there toweling off.  And that’s not even taking into account all of the people who text and drive.

The locker room incident really happened to me not long before Suspense Magazine contacted me about writing a story for NOTHING GOOD HAPPENS AFTER MIDNIGHT. I remember confronting Mr. Selfie: “Do you mind not doing that? I have no clothes on…”

“I’m not taking your picture!” the guy countered.

“There are signs everywhere saying you’re not supposed to be using cell phones in here.”

The guy looked at me as if I were utterly insane.

I thought about that incident while I was out on my constitutional, dodging so many cell phone users on the sidewalk. It occurred to me: Wouldn’t it be great if you could invent a device that would shock a rude cell phone user—and put their phone out of commission?

That was the inspiration for my short story, Cell Phone Intolerant.

And I have to admit, writing the story was quite therapeutic. I was also somewhat inspired by a classic old Twilight Zone episode starring Burgess Meredith as a myopic bookworm, “Time Enough at Last,” written by Rod Serling (from a short story by Lynn Venable).

In fact, when I read an advance copy of NOTHING GOOD HAPPENS AFTER MIDNIGHT, I felt like I was reveling in a marathon of Twilight Zone classics I’d never seen before. My fellow authors have helped create a wonderful smorgasbord of suspense. I hope my Cell Phone Intolerant is worthy of a place among these brilliant stories.

So, call a friend and tell them about NOTHING GOOD HAPPENS AFTER MIDNIGHT. Just be careful where you use your cell phone. 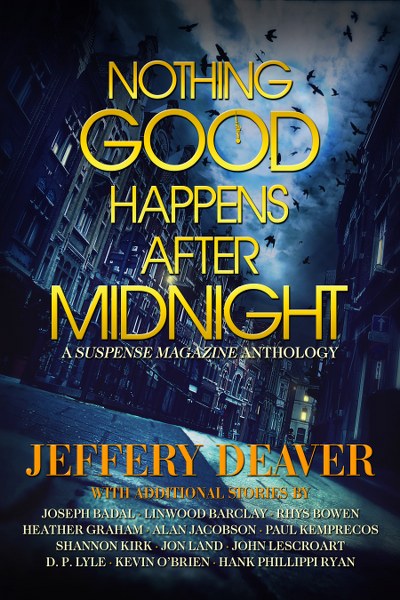 The sun sets. The moon takes its place, illuminating the most evil corners of the planet. What twisted fear dwells in that blackness? What legends attach to those of sound mind and make them go crazy in the bright light of day? Only Suspense Magazine knows…
Teaming up with New York Times bestselling author Jeffery Deaver, Suspense Magazine offers up a nail-biting anthology titled: “Nothing Good Happens After Midnight.” This thrilling collection consists of thirteen original short stories representing the genres of suspense/thriller, mystery, sci-fi/fantasy, and more.
Readers’ favorites come together to explore the mystery of midnight. The ‘best of the best’ presenting these memorable tales, include: Joseph Badal, Linwood Barclay, Rhys Bowen, Jeffery Deaver, Heather Graham, Alan Jacobson, Paul Kemprecos, Shannon Kirk, Jon Land, John Lescroart, D. P. Lyle, Kevin O’Brien, and Hank Phillippi Ryan.
Take their hands…walk into their worlds…but be prepared to leave the light on when you’re through. After all, this incredible gathering of authors, who will delight fans of all genres, not only utilized their award-winning imaginations to answer that age-old question of why “Nothing Good Happens After Midnight”—they also made sure to pen stories will leave you…speechless.
Contents:
INTRODUCTION By Jeffery Deaver
12:01 AM By Alan Jacobson
Cell Phone Intolerant by Kevin O’Brien
All Aboard by Hank Phillippi Ryan
Gone Forever by Joseph Badal
Night Shift by Linwood Barclay
Midnight in the Garden of Death by Heather Graham
The Sixth Decoy by Paul Kemprecos
A Creative Defense By Jeffery Deaver
After Midnight By Rhys Bowen
Easy Peasey by John Lescroart
TONIC by D. P. Lyle
Tonight is the Night by Shannon Kirk
ATM By Jon Land
Review From Publisher's Weekly:
Most of the 13 all-original tales in this superlative anthology are unified by strange or unpleasant incidences occurring after the stroke of midnight. In contrast, Alan Jacobson’s thrilling “12:01 AM,” about a kidnapper patterning himself after a serial killer on death row, defies the perception that nothing good happens after midnight, as does John Land’s “ATM,” a redemption tale of a young man sent on a series of vague quests to improve people’s lives. Of special distinction are Linwood Barclay’s sublime nail-biter, “Night Shift,” about a newspaperman trying to stop a late-night caller from going on a killing spree, and Kevin O’Brien’s “Cell Phone Intolerant,” a darkly amusing vigilante tale of an anti–cell phone zealot whose crusade to punish inconsiderate people has shocking repercussions. Other standouts include Heather Graham’s disquieting spine-chiller, “Midnight in the Garden of Death,” in which high schoolers spend the night in a cemetery, and Deaver’s supernatural gothic, “A Creative Defense,” which underscores the power of music. This volume is guaranteed to keep readers burning the midnight oil well into the wee hours.
Goodreads * Amazon
Additional Praise:
“Something very good happens after midnight…just pick up this brilliant book and be transported—and very afraid!”
—Peter James, UK #1 Bestselling Author of the Detective Superintendent Roy Grace Series
“NOTHING GOOD HAPPENS AFTER MIDNIGHT is a treat—dark, chilling, and delicious. Grab it.”
—Meg Gardiner, Edgar Award-Winning Author of The Dark Corners of the Night
“NOTHING GOOD HAPPENS AFTER MIDNIGHT proves that the witching hour still has the power to haunt in this suspenseful collection of stories by luminaries in the literary world. Inventive, twisted, and downright chilling, here is an anthology to be savored—well past midnight and into the dead of night.”
—James Rollins, #1 New York Times Bestseller of The Last Odyssey
“This anthology showcases some of the best talent in the thriller genre—or in any genre. Whether quirky or creepy, each story displays the talent and uniqueness of its author. And since all are so good, this collection is a delightful read.”
—Sandra Brown, #1 New York Times Bestseller of Thick as Thieves
“If you like intrigue and suspense, you’ll love this salmagundi of tense tales from some of today’s short story masters. This book is guaranteed to keep you awake until midnight and beyond.”
—Steven James, Bestselling Author of The Bowers Files
“Nothing Good Happens After Midnight is loads of fun. The stories from this lineup of all-star authors are a blast to read, with plenty of neck-snapping twists and heart-stopping thrills that will keep you turning pages way past the title’s witching hour.”
—Boyd Morrison, #1 New York Times Bestselling Author
“Readers rarely get a gift such as this—a superb collection from the giants of mystery and suspense.”
—Robert Dugoni, Bestselling Author of the Tracy Crosswhite Series
“Midnight is the magic switch. Safe becomes dangerous, good becomes evil, quiet turns raucous. When the clock strikes twelve in NOTHING GOOD HAPPENS AFTER MIDNIGHT, a talented crew of writers unleashes a maelstrom of thrills so intense, you will never sleep again. Unputdownable!”
—K.J. Howe, International Bestselling Author of SKYJACK
“NOTHING GOOD HAPPENS AFTER MIDNIGHT is a treasure chest of novelties, curiosities and gems. From Kevin O’Brien’s ‘Cell Phone Intolerant’ to Shannon Kirk’s ‘Tonight is the Night’ and Jon Land’s surprisingly heartfelt ‘ATM,’ you’ll never step outside at night in quite the same way.”
—Joseph Finder, New York Times Bestselling Author of the Nick Heller Series

**scroll through the slideshow to find out more about the authors!!**
https://albumizr.com/a/DGYO

Follow the tour HERE for special content and a giveaway!
$20 Amazon gift card,
Hardcover Copy of Nothing Good Happens After Midnight
– 1 winner each!
a Rafflecopter giveaway